An Arizona restaurant was forced to close its doors indefinitely this week after a politically charged Facebook post the eatery’s owners wrote prompted mass criticism from social media users.

Here’s what the post (that later went viral) said: 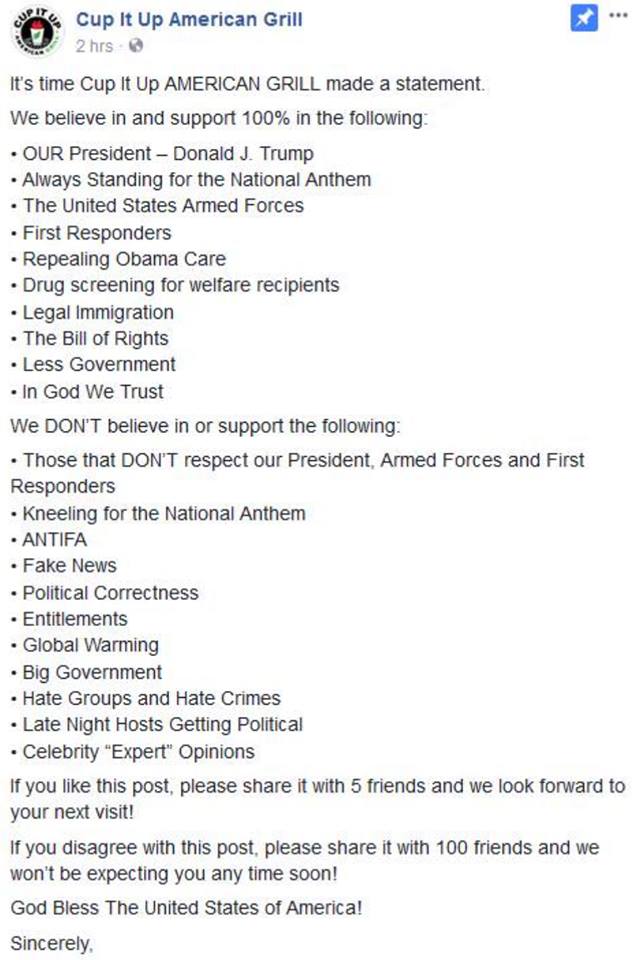 The restaurant received “so many angry phone calls” that several employees chose to quit, reports say.

“People threatened to burn down the restaurant with the owners in it. It’s a crazy world we’re in,” Ron Sanchez, whose daughter worked at the eatery, told ABC15, a local television station.

The restaurant apologized for the post but social media users flooded the eatery’s Yelp page with negative reviews.

Now imagine what would happen if a liberal leftist business was forced to close down because of violent threats for its political views.

We’ll never know. Because people who oppose liberal leftist views are, nearly without exception, peaceful and respectful toward free speech.

That’s why you don’t hear of threats against Jimmy Kimmel, George Clooney, Meryl Streep or others based upon their political views. Sure, like all celebrities they face their share of stalkers and other crazies. But when a small restaurant in Arizona chooses to post its views on social media, it’s met not with boycotts or criticism, but with threats to blow up the restaurant with the owners in it.

No, I’m not suggesting that all liberal leftist persons are violent. But I am pointing out that virtually all of the intolerance, intimidation and threats of violence against people of differing political views comes from the left, and not from the right.

Why is leftism such an intolerant ideology? It’s not difficult to understand. Leftist “progressivism” is like Communism. It’s based entirely on force, not liberty. It’s the ideology of social engineering. People are not treated like individuals with the right to think, speak and act as they see fit, so long as they don’t physically harm or steal from another. According to socialist leftism, individuals don’t really exist. They are merely cogs in the social engineering wheel to be exploited and manipulated — always for their own good — by their superiors in government, academia, media and (incredibly) the airheaded anti-intellectuals who inhabit Hollywood.

Leftism only speaks in terms of the individual’s membership in various racial, religious, gender or other groups, and never as individuals.

Put simply: Leftism is an ideology of force, intolerance and intimidation. So was the the ideology that gave rise to progressive leftism as we know it today. That ideology was Communism.

Just as children, once they grow up, often adopt the least desirable qualities of their parents, contemporary leftism has increasingly adopted the attitudes and policies of its intellectual and political grandparents, the Communists.

That’s the reason why virtually all of the nastiness, threats and increasing calls for violence are coming from the left.

You can’t deny the value of the individual without eventually declaring war on individuals. That’s why it’s Trump supporters, not Democrats, who are routinely threatened, called names, and intimidated on a daily basis. Leftism loves groups, but it hates individuals. It cannot stand the self-assertion and independence that a nation of free men and women requires and encourages.

And that’s why they’re so intolerant, nasty and mean.